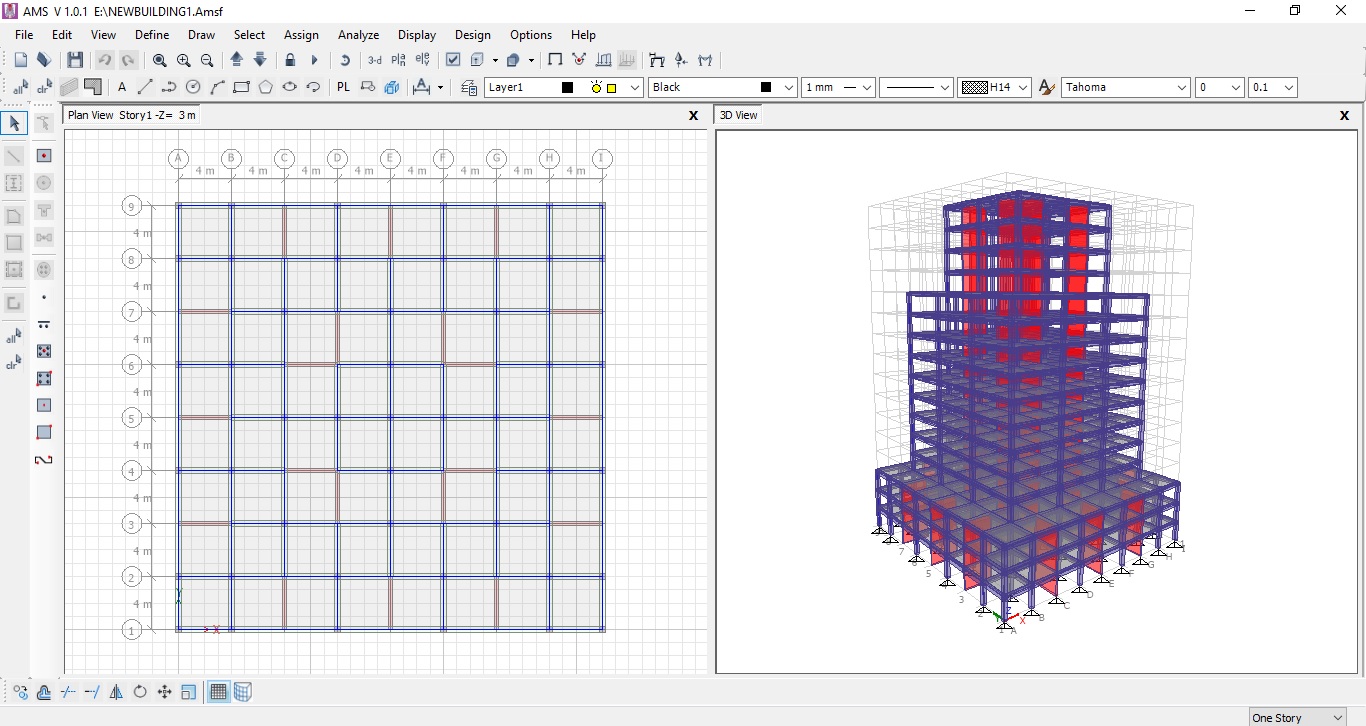 1- The program can create grid system as coordinated lines in the horizontal section of the structure. 2- Equipped with drawing tools provide a drawing environment for graphical elements (line, polyline, polygon, circle, arc, ellipse, arc ellipse, region, text, dimension) and perform (extend, trim, offset, move, scale) for the all graphical elements, this is similar to what can be done in AutoCAD. 3- Equipped with reinforcement design tools which provide a powerful capabilities to design and draw the longitudinal and transverse reinforcement in all its details and in easy way. 4- Equipped with snapping tool guides and helps user in drawing, it can perform direct capturing of (joints, ends and midpoints of lines, grid intersections, nearest lines and frames, perpendiculars, etc.). 5- Can perform duplication of elements in three forms, linear (duplication according to coordinates X, Y), radial (duplication according to rotation angle), mirror (duplication symmetrically according to an axis). 6- Perform linear and radial extrusion tools that extrude joints into frames and extrude frames into shells. 7- Can search and select elements according to their types, properties, materials, or to their coordinates. 8- Creates a set of most popular forms of frame elements required in the design, and calculate their geometric properties: steel sections (I, channel, Tee, angle), concrete sections (rectangular, circle, Tee, L), in addition to the sections definition of shear walls, slabs, footings, architectural walls, and stairs. 9- Imports and exports to AutoCAD as (DXF) file format, AMS stores the file in graphical data as graphical elements and also it can convert these elements into structural elements as desired by the user. 10- Imports and exports a structural file from programs support (IFC) format (industry foundation classes), IFC files are platform neutral and can be read and edited by any BIM software, AMS stores the file in structural data as elements and materials and loads with full characteristics defined.

The program effectively analyzes the structure according to the finite element method using direct solver. At the present stage, the analysis and design is limited to only the linear reinforced concrete elements of rectangular section. (Shell elements will be include later). Membrane slab can be defined, which is a surface element that can be loaded with loads and it transfers this loads and its self-weight to the surrounding beams according to the principle of lines of refraction (bisector of the angle between two adjacent linear elements). The stiffness of this element does not included in the global stiffness matrix. This same method is followed in all CSI (Computers and Structures, Inc.) programs for this type of surface elements. The membrane slab can be forced to work in one direction also. The program introduces architectural wall and stairs elements, they are also ignored in analysis and their work is limited to transfer their self-weight to the carrying frame elements (beams).

The program performs elastic static analysis. And elastic dynamic analysis (mode superposition method), where the frequencies and modes of vibration are calculated solving the Eigen problem (natural vibration frequencies and modes) or using load dependent Ritz victors. At this stage, the dynamic analysis was limited to response spectrum seismic loading method only (the program computes the maximum response of the structure during the earthquake, using the response spectrum analysis (RSA)).

The program performs static elastic-plastic analysis which takes into account the nonlinear properties of the elements materials and their elastic-plastic behavior represented by hinges positioned at the ends of the linear elements, (only the moment hinges have been developed at present stage).

The program introduces the impact of footings settlements on the analysis, where it performs iterative analysis to calculate the settlements and enters them as an additional loading pattern that the user can enter in the design phase with any load combinations.

In order to perform structural analysis, the program provides the possibility of: 1- Introduction and appointment of all forms of loads (forces, moments), distributed (trapezoidal, uniform) and concentrated, which acting on the structural elements, as well as the appointment of concentrated loads and displacements in joints in all directions. 2- Definition of construction materials (concrete and steel). 3- Frame assignment: releases at the start and the end of the frame elements, frame elements property modifiers, and line springs to the frame elements. 4- Joint assignment: restraints and springs (translation and rotation) in global directions (X, Y, Z), and floor rigid diaphragms constraints.

After analysis, the program displays the deformed shape of the structure, and the internal forces results in the structural frame elements (moments, shear forces, axial forces, and supports reactions) within schemes in plane, elevation and 3D views.

Fig. 2.2. Deformed shape of the structure in 3D view within AMS

Fig. 2.3. Elements moments in an elevation view of the structure within AMS

Designing the frame elements (beams, columns) according to ACI (American Concrete Institute), using the load and resistance factor design (LRFD). (ACI has been adopted for the design as a starting stage, so that program will be developed for adopting the Russian codes at the next stage).

For columns. The user can design all columns together quickly and easily by determining the initial dimensions of the columns and choosing some parameters (the minimum and the maximum diameter of the reinforcing bars, the side of the increase in dimensions, and the amount of increase), the program finds the appropriate column section to withstand the forces (axial forces and moments M22 , M33) on each floor, and distributes the reinforcement within, generating three-dimensional biaxial interaction surfaces for the column section, and achieving its bearing capacity according to ACI. The program designs the reinforcement details of the columns, calculates (overlap lengths, the distribution of the stirrups, the condensation distances, etc.) within the requirements of the code used. User can also specify the direction of the column overlap between the floors, and the program will automatically calculate the reinforcement and individualize it.

For beams. The program also allows designing all the beams within the structure in one go, by introducing some parameters from which to start in the design process (specifying the diameter of the bars, the minimum and maximum spacing of bars, the specifications of the stirrups, and the inclusion of upper or lower reinforcement). The program designs the beam according to the shear force and the bending moment M33, and increases the cross section in the event of failure to achieve the appropriate value according to the selected reinforcing ratio. The program automatically chooses the diameter and number of bars and distributes them within the cross section and achieves the distances of overlap and anchoring corresponding to the code used, and also merges them automatically so as to achieve the economic factor to provide the largest continuity of the bars within the beam.

Design results can be presented in details within the elevation and 3D views of the structure, in addition to a rendered three-dimensional perspective of the structure with all reinforcement details.

Fig. 2.5. Reinforcement details in an elevation view of the structure within AMS